The Good We Can Do - a heartfelt THANK YOU to everyone who made this possible!!

I've been so excited to share this update with you all for so long; it is especially exciting to be able to give it to you as a high note to end this crazy year on!

The trip to Serbia my dear friend Amy and I went on in October was unlike our usual trips.  It was an exploratory mission to find out what the situation was like for refugees and those helping them there, and much of it was spent making connections and scouting out need.  We did have baby carriers, of course, but they were held up in customs for the majority of the time we spent there. Carry The Future provided us $800 to spend on 'additional aid' as needed, so, after scouting out the various encampments and aid centers and polling folks for what the greatest needs were, we hit up our favorite big box store for a massive aid run.

Let me tell ya: remember all those shows where they'd give people shopping carts to fill with as much stuff as they possibly could?  That's essentially what we got to do - granted, there was considerably more math involved - but it was every bit as fun as I imagined it would be...and the fact that it was all meeting specific needs to boot?? My amazing travel sister Amy and I were positively giddy...which might be obvious from the pictures.


Next, it was off to a Serbian version of Costco:


And I have to include this one because all of that on the fly math - calculating how much of each thing would give us the biggest bang for our buck, taking the exchange rates into account...it totally paid off.  When we did our final calculation to see how close to our budget we were, we were Amazingly On Point!!

Not too bad for budgeting through exchange rates.

...But now we had a problem. We had all used up all of our aid money, and had prepped and distributed it all, but it was only a couple days into our trip, and our carriers were still stuck in customs.  Not wanting to waste our time there when there was such obvious and urgent need, we decided to strike out on our own and see if we could raise a little bit more to spend while we were there on the ground.  Amy created a paypal link where people could donate whatever funds they so chose, and we both shared that link on our own personal facebook pages - and that was it.  Overnight, our amazing support networks shared those posts and donated a whopping $900, giving us even more than we had from CTF the first time around.  Within 24 hours, that number had risen to over $1,400.  We were floored, and so, so SO grateful to our friends and family for rallying to make such an immediate difference.  We got right to work!

After a lot more math...


Armed once again with cash:

We headed off on an adventure to find the Chinese market; which we had been tipped off about by various aid workers there...evidently they have the best prices in Belgrade for the types of items we needed to get, and the sellers were open to haggling.  Edin gave us a lesson (seriously, wrote out diagrams on a whiteboard and everything) on the best way to haggle down the prices, and off we went.  Our GPS - which we named Charles, and spoke with a British accent once finally finding an English language setting - was utterly useless in finding this place, so it took us the better part of a day to find it, but we finally did - using old fashioned maps and landmarks and guesswork - and were not disappointed!


Armed now with our carriers and remaining aid, we took the trek out to the Hungarian border.  There, we found another 'flea market' that reputedly had even better prices than the Chinese market in Belgrade...We got as much stuff as we possibly could, and filled our car to bursting.


We would have gotten more, but we simply couldn't fit anything else in our car!!

At North Star, we were able to distribute massive amounts of stuff.  Syd was especially happy to get the mylar emergency blankets that I brought from home (and yes, he already knew that they had to be used under people's clothes in order to be effective.)

Also stashed in my panther pack, I had two bags full of handmade hats from a friend here in DC; Laura had broken her ankle and utilized her immobile healing time to make as many hats as she possibly could...so I had the great honor of handing those out as well.  The kids loved them.  They were the first thing we handed out, and it was so fun to see little heads running about with familiar bright pops of color throughout the rest of our stay!


Back in Beograd, we spent our last full day distributing the last of our aid stores. By giving up our free day, we were even able to distribute all of our baby carriers, despite the hold up! We held several training sessions with core volunteers from each of the groups we had worked with (and left them with small supplies of carriers), so that we could rest assured that they would be able to properly fit not only our carriers, but any they receive in the future, too!


At the close of that final day, we were faced with a bit of a conundrum.  We still had a decent chunk of aid money left, but no time, and frankly not a whole lot of obivously unmet needs that were within our means to address in that moment.  After much discussion and deliberation, we found a fabulous way to spend it all in a meaningful way while still on the ground in Serbia, therefore doing some serious good while fulfilling the terms we'd laid forth when we approached our friends for help.

For many of the refugees, having access to a computer is the only way to communicate with their families.  A few aid centers offer wifi, but only the asylum center had publicly available computers - and that is the place that is like a sardine can...getting a chance to use a computer there is not guaranteed. Knowing that having a way to contact family members is crucial to the wellbeing of these displaced people - and knowing that Edin had laptop computers on his wishlist for the center, and also taking into account how much of himself he poured into this place, what a difference it made to the people he served, and how far above and beyond he had gone to assist us in addition to all that, we decided to put our remaining aid money towards getting him a laptop for the center.

Amy had to leave early the next morning, but I had a later flight and was able to put my morning to good use.  After consulting with the AMAZING woman who worked at the hotel and helped us out -enthusiastically - many times, I found a place where I could get not just one, but TWO brand-spankin' new (which means that they came with a several year warranty, and should anything happen to them, he can take them in to get fixed) computers!!

The AMAZING woman at the hotel helped to make it a nice surprise; she put them in the hotel safe and we sent a message to Edin to find her.  We left this note along with it:

Of course there were many, MANY simply wonderful people that we met along the way, and so many fabulous organizations committed to doing whatever it takes to help refugees on their journeys, but I genuinely cannot overstate the amount of work Edin put into helping us during that week.  He expended so much energy, time, and money on assisting us, we wouldn't have been surprised if he decided it was too much work to be associated with us anymore; so we felt a strong desire to show him how much we appreciated his work, and that we are willing to help his org as much as he helped ours...

But he didn't distance himself from us, instead he continues to work closely with us as a liaison within the Serbian refugee community, and was instrumental in us getting a count - and subsequent request to aid - the number of families in the camps in need of carriers. In January, our teams will be bringing 500 baby carriers to families in need in Serbia!

So, to sum up, I am proud to share with you the official numbers from this single trip; Amy and I - with the help of all of our wonderful friends and families - were able to provide: 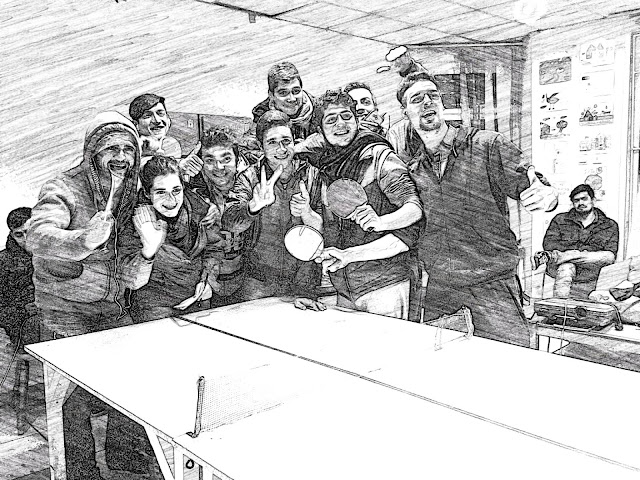